Following is an interview conducted by the APA TV team after our three hour media workshop held at the large American Psychiatric Association annual meeting on May 19, 2015 in Toronto Canada. It covers our scientific evidence that our individual awareness can expand into a vast body of knowledge, understanding, and wisdom beyond our life experience. Science has not yet accepted this possibility for expanded awareness.

THE TASK — In 1983 Sai gave me a miracle to introduce science to the expanded consciousness of the spiritual dimension. This is the task we faced in presenting evidence that our individual limited consciousness can expand into a vast region of wisdom that lies beyond our life experience.

OPENING REMARKS — at the scientific meeting about our case of Xenoglossy – the ability to speak and translate a language not known by natural means.

EARLY LIFE TRAUMA — is it related to the appearance of Xenoglossy?

ANALYSIS OF THE SANSKRIT — showing the complexity and coherence of the messages.

To listen or read FREE

Click here for all audio chapters of the “Holy Man” book.

Click here for audio chapters of the “With Love Man Is God” book.

Click here to buy the “Holy Man” book for Kindle from Amazon.

Click here to read FREE the “With Love Man Is God” book. 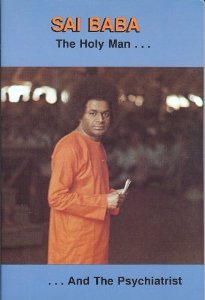